The term gunas designates the sattva, rajas and tamas forces that compose and animate the nature, while maintaining its balance. These energies interpenetrate on the material plane and on the subtle plane. The yogi knows how to sound and trace the Manifestation with the help of the chakras. Through the yogic process, he escapes from the grip of nature to reach the other shore: the original state beyond the three attributes, pledge of happiness and peace. 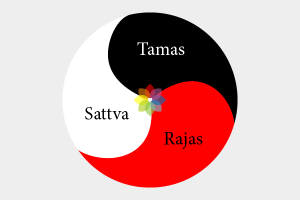 Prakriti and the three modes of manifestation:

In Samkhya and yogic approach, two polarities exist at the very start of any creation: Purusha (consciousness) and Prakriti (nature). The moment they are braced, life assumes its shape. For the tantrika, this shaping of the universe is symbolized by the dance of Shiva Shakti : two lovers who playfully get lost and meet again amidst their infinite creation.

In Sanskrit, Guna means “string, thread" "the thread that weaves the universe." The Gunas are the attributes of Nature (Prakriti). They act, on an objective level, as the cause of sensible phenomena in the material world, and on a subjective level, in the psychic life and mind. The Gunas are named Rajas (heat energy and motor/mental activity), Tamas (cold energy and inertia/psychic darkness) and Sattva (harmony and balance energy, light/intelligence). These energies permeate everything, constantly moving and interpenetrating. Always balanced, they allow the Manifestation (the principle of life embodied in matter) to deploy and the polarities to act.

Among the 5 elements, earth is of tamasic constitution by its density, its downwards static inertia and cold darkness. Fire is rajasic due to its warmth, kinetic nature and its propensity to expand. Space is sattvic for its equilibrium and light. Water is both tamasic (cold nature) and rajas (movement), the air is both sattvic (lightness) and rajasic. So everything is born, grows up and perishes according to these three modes. Each being (mineral, plant, animal, human) is also made of the five elements activated by the gunas. The physical level is tamasic because related to weight and gravity. The energetic level is rajasic as related to Agni - the inner fire that boosts the metabolism and transforms.

Mentally, the mind is sattvic as linked to knowledge and consciousness (pure Light). When the gunas are imbalanced, one can feel some effects, for example when Tamas affects the mental level, it becomes opaque and one can feel drowsy or dispersed. Likewise, a restless mind reflects an excess of rajas. The practice of yoga helps balancing the gunas in the regions and levels where they should reside. Meditation helps restore a natural satvic state of mind that is calm, clear and bright.

Yoga as a path to transcendence:

Yoga invites us to realize that the activity of the body and the psyche result from the constant action of the three attributes; it is the course of nature around us and within us. Thus, we realize that macrocosm and microcosm are not divided or separated; the universe is within us and we are part of the universe. Yoga invites us to remain as the observer who witnesses everything and can step back to better distinguish between the activity of the gunas and the Self (conscious witness) that remains unaffected and unchanged.

Nature is acting, not me ... Man, whose consciousness is veiled by the ego, is chained to the forces of Prakriti, blindly convinced that he acts according to his free will. The yogi – in an absolute quest for union with his original state (before the birth of the ego), natural and beyond the pairs of opposites - will develop a range of different techniques that aim to better understand, master (but not control) and transcend the human condition governed by the gunas. Thus, the practitioner goes against the current of energy that tends downward due to gravity, and devotes himself to activate Urdhva Retas - the rise of energy. This also induces the awakening of Shakti / kundalini - the spiritual energy - in an upward movement along the Sushumna, the central channel.

Through the pose (asana), the association of the three levels: physical, energetic and subtle gives a good indication of the temperature of gunas inside us. A pose taken with strong will to control and arousing some nervousness reflects a rajasic dominance. Instead, a pose taken with too much softness, in which one gets drowsy results in a tamasic climate. The sattvic state is to be looked for : "Sthira Sukham asanam " “the posture is both firm and comfortable.” (Yoga Sutra of Patanjali) maintaining a quiet alertness.

Similarly with the breath, we note that internal imbalance can quickly bring a feeling of discomfort if breath is too powerful, jerky, disturbed by emotions or lacks vigour. However, playing with the breath leads to better understand and control one’s energies. A victorious ujjayi combined with the rajasic strength of Agni in Paschimottanasana allow this fire to regenerate the spinal cord and nervous system by pushing the Prana (vital energy) throughout the energetic structure. A receptive and sensitive state - tamasic - in Kurmasana creates a favorable climate to center oneself inward and explore one’s inner senses.

Ekagrata - fixation of thought on a single point with the support of bija, visualization or breath route - suspends for some time the action of the gunas. Similarly, the state of yoga - meditation - is the ceasing of thought, thought itself being made - on a subtle level - of the attributes of nature. This results in an alteration of the grip of the gunas on the inside climate: peace of mind, discernment and a certain detachment as regards to the activities in daily life. However, if the project to escape the constraints of nature is ambitious, the yogi’s attitude concerning his practice must remain neutral and equanimous, whatever the results may be:

"… if one does everything as a matter of duty and gives up attachment to the result of his work, his renunciation is said to be in the mode of goodness.” Bhagavad Gita - 18.9

Rising in each energy center or chakra, the yogi first explores and balances the tamasic guna (Muladhara - earth and Svadhisthana - water) and rajasic one (Manipura -Fire). Their harmonious functioning is essential for proper physiological vitality, smooth flow of energy and a peaceful development of the being. These primary explorations will also shake the Kundalini / Shakti – the sleeping mistress of creation - and allow her radiant ascent through each chakra. At the crossroads, the junction point where rough trends get subtilised and balanced is in the heart. The sattvic harmonization in Anahata sets up profound changes in the energetic and psychic structure of the being. In the higher chakras, Sattva gets even more subtle because rising Shakti annihilates all the common trends and dualities; it illuminates and shines in the whole being. In Vishuddha, the expression becomes clearer and fairer; in Ajna, the quality of attention is well balanced between will and sensitivity.

Beyond is nirguna - the state that transcends the three gunas - the stepping back to the source - the state of Brahman - the Absolute without attributes and beyond all polarities. Shakti reaches its climax and joins her beloved in a divine and sacred union. This fusion both means integrating our complementarities: the feminine and masculine aspects and, the absolute consciousness that puts an end to the cycles of death and birth. It is the ultimate aspiration of the yogi in his human incarnation: Moksha the state of enlightenment of the individual soul and its reabsorption in the Self. This path of realization embodies the awareness of man’s limited conditions and his potential to overcome them: the passage from the separate individual to the universal whole that integrates everything.