Use of malas in the Indian tradition

Malas have long been used as meditation tools in various spiritual movements not only in traditions from India but also in monotheistic religions. Malas are garlands of seeds or beads mainly used for recitation of mantras or prayers and these prayer beads seem to have an extremely ancient origin going back to the dawn of time. It cannot be stated with certitude that malas originated in India but they have been used in Indian tradition for thousands of years as confirmed in various references in the Purana.

Malas generally come as a string of 108 seeds plus one, the 109th bead, which is used as a knot to hold the whole necklace. The 109th bead represents the Mount Meru, the axis of the universe in traditional cosmogony.
Mount Kailash is the physical embodiment of Mount Meru on the earth and is located in the Ngari region of Tibet. Mount Kailash is considered to be the home of the great god Shiva. The 109th bead also symbolizes the Guru, the spiritual master who dispels the darkness of ignorance.

Symbolism of the number 108

This number is used in many other aspects of Indian tradition and can be found in the 108 Principal Upanishads, the 108 names of Ganesha, the 108 nadi of Anahata Chakra, the 108 points defining the Shri Yantra, the 108 Shakti Pitha1, the 108 gopi of Krishna, the 108 marma points of Âyurveda, the 108 mudra of Bharata Natyam, etc.

Arithmatical, geometrical and numerological aspects of the number 108

First, it can be noted that the number 108 contains 1 and 0, that is to say fullness and emptiness, presence and absence, a linear (1) and circular (0) vision that stands for one. Indeed, if we extend a straight line on a sphere, for example our earth, we get a perfect circle like the equator. The number 108 also contains 8, which is often associated with infinity as a loop of eternity. The figure 8 is also a structuring number that can be found in the eight directions of the compass, in the eight anga (limbs) of traditional or tantric yoga and in the Noble Eightfold Path of Buddha.

Amongst the ten figures, which help constitute numbers, 9 is the last one, it therefore ends a cycle. Besides, every multiple of 9 is numerologically reducible to 9, which is not the case of other figures. Every time we get to the figure 9 or one of its multiples, it is as if we were crossing a threshold. This characteristic brings to light a kind of perfection. 9 brings new perspectives and ideas2.

Symbolism of the number 108 in Indian tradition

In Indian tradition 9 is Brahma’s figure, the creative principle. The numerological reduction of a kalpa (4.32 billion years) or ‘a day of Brahma’ equals 9, as well as that of the various cycles or yuga which
constitute kalpa. The fact that the creative principle is associated with the last figure might surprise those who mainly have a linear approach to things. Nevertheless, it clearly underlines the cyclical nature of the Indian vision in which Brahma is more related to a permanent auto-creation than to a God who would have created the world from nothingness at a given time. We deal with a natural cyclical process rather than with a creation relating to a god who would be separated from his creation. 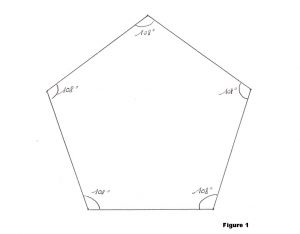 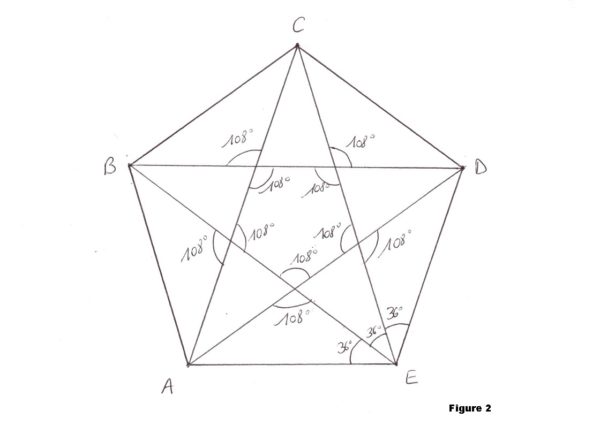 From a geometrical standpoint, it can be noted that the 108° angle helps draw a pentagon (figure 1) and a five-pointed-star also called pentagram (figure 2). Indeed, for a regular pentagon, all the angles are alike, so each interior angle is 108 degrees.

This five-pointed star has equal angles of 108 degrees each.

In the same way, the exterior pentagon can be chosen as the centre of a bigger star, which will then reveal a new pentagon and so on.

This five-pointed star already existed in Mesopotamia 3,000 years B.C. The symbol of the Pythagoreans was the five-pointed star. This star was also used by Plato and Hildegard of Bingen - among others - and can be found in most spiritual traditions. The pentagram plays an important role in western esotericism and is also found in the East. In Chinese tradition, the five-pointed star represents the cycle of the seasons and is currently associated with the five elements.

As regards yoga, this pentagram is found in the middle of the Shiva yantra (see figure 3). It is no accident insofar as the figure 5 is also associated with Shiva.

The light of the star can represent universal awareness, non-dualistic awareness, open awareness and Shiva’s consciousness.

The five branches of the star can be linked to tantric yoga. In tantric yoga the body is usually represented by the five-pointed star – head at the top and the other four limbs slightly parted. The five branches can also be associated with the five senses, the five elements and also with the five aspects of Shiva. In his book Myths and Gods of India, Alain Daniélou writes on this subject, “The number ‘5’ is a symbol of Shiva since it plays a major role in every manifestation of life (..) Shiva is thus represented with five faces corresponding to the five main aspects of the perceptible world from which spring the five elements, the name given to the five aspects of creation as perceived by our five senses. All the structures in the world are made of five states of matter.”

It can also be noted that the moon, which is associated with Shiva has five main cycles whose duration varies between twenty-seven and thirty days3.

In a nutshell, even if the number 108 is not divisible by 5, there is a close link between these two values. Rudraksha is not only a tree or a seed; it is first and foremost the eye of Shiva. The round shape of the mala is a reminder of the third eye of non-duality. Practices with a Rudraksha mala associated with a mantra or pranayama can help develop this direct vision.

This approach may be criticized as purely abstract symbolism regarding 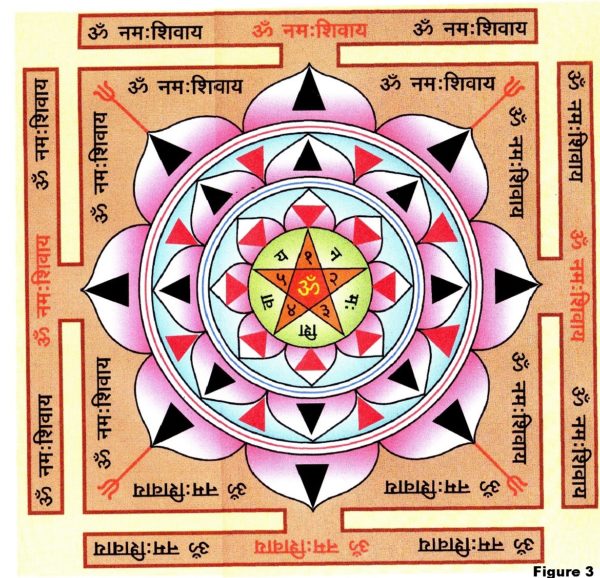 numbers. However, other elements can be provided to reveal the link

between the number 108 and more concrete astronomical aspects. In that respect, we will be mostly interested by the numbers 4, 9, 12 and 27 all divisors of 108.

In the previous two articles4, it has been noted that yoga and astrology are closely related especially when it comes to the relation between the mala and solar and lunar zodiacs. This relation, though, needs further explanation.

We have mentioned that 108 = 9 x 12 clearly refers to Indian astrology with its twelve zodiac signs5 and nine planets: the Sun, the Moon, Mercury, Venus, Mars, Jupiter, Saturn, Rahu and Ketu. The first seven planets are quite well known, which is not the case of Rahu and Ketu as they have no physical form. They correspond to the nodes of the Moon, to the dragon’s head and tail. Rahu is the dragon’s head also identified with the North node or ascending node. Ketu is the dragon’s tail known as the South node or descending node.

In astronomical terms, the two orbital nodes of the moon are the points of intersection of the orbit of the Moon with the orbit of the Earth also called the ecliptic6. In traditional Indian astrology we can find nine planets: seven solid real planets visible to the naked eye in the sky and two invisible planets also called shadow planets, Rahu and Ketu, which are not actually planets of physical substance like the other seven planets. Rahu is the dragon’s head while Ketu is the dragon’s tail. These two planets are often associated with spirituality and often considered as much more important than the other seven planets.

Number symbolism related to the sky

It can be noted that a solar year consists of twelve lunations7 also called synodic months. However, if we take into account the other cycles of the moon, which last around 27 days, there are 13 cycles per year. Consequently, some of the Mayan calendars called tzolkin consist of 13 months.

But 12 is a solar number par excellence as the radiance of the sun occupies one twelfth of the zodiac, that is to say 30° in the sky, where the only planet visible is the sun in its majesty.
It was therefore logical that the Elders chose 30 as a solar unit, dividing the 360 degrees of the zodiac by 30 to obtain 12. This division of the zodiac in twelve can be found in most astrological traditions.

If we combine the 7 planets visible to the naked eye with the 12 signs of the zodiac, we obtain 84 different possibilities (7x12=84) of light manifestation or 84 distinct energy forms.

84 is a sacred number in India. It can be found in the 84 main asanas in hatha yoga, in the 84 mahasiddhas in ancient Indian history and in the 84,000 Buddha’s teachings.

Besides, it can be noted that 7 and 12 are related, as 7 is the sum of the terms 3 and 4 whereas 12 is the product derived from the multiplication of these two same terms. If 4 symbolises the earthly plan and 3 the celestial plan, the relation between top and bottom is well established in 7 and 12, and even more so if 7 and 12 are combined.

If we use the same method, we can combine the 9 planets with the 12 signs of the zodiac and obtain 108 different planet positions in the sun chart8.

The moon chart (Chandra Kundali) is almost as used as the sun chart (Surya kundali) in Indian astrology. The moon chart is composed of 27 nakshatra, or lunar mansions, which can be compared to the 27 days or so of the other four main cycles of the moon9.

The number 108 can thus be considered as a key factor relating the sun chart to the moon chart. These two charts are two different ways to perceive the celestial plane as Kerneïz clearly showed it in his book “Hatha Vidya” in early 194510.

Using malas as meditation tools can be seen as a way of unifying solar and lunar flux, combining Ida with Pingala thus echoing the union of Chandra Kundali with Surya Kundali.

1 The 108 sacred places of Shakti also called Shakti Peethaas. When Sati, spouse of Lord Shiva, learnt that her father Daksha had refused to invite Lord Shiva to his Yajna (a spiritual practice done with fire to offer different items to God), she forced Shiva to go with her to Daksha’s place. When her father saw Sati, he started to insult her along with her husband. She prayed to the fire of the Yajna to burn her to ashes. The fire burnt her down and wherever Sati’s ashes fell down, the place was considered as a Shakti Peetha.

5 The symbolism of these twelve zodiac signs is very similar to that of the twelve zodiac signs in the western astrology. However, a sidereal system is used in Hindu astrology while a tropical system is used in Western astrology. Because of the precession of the equinoxes, the two systems do not remain fixed relative to each other but drift apart by about 1.4 arc degrees per century.

8 In Yajur Veda, the number 9 is associated with Surya the Sun. 9 and 12 are two solar numbers which refer to 108 in another way.

9 Apart from the lunation which lasts 29 and a half days, we can observe 4 phases of the Earth: the Tropical, Sidereal, Draconic and Anomalistic revolutions. Each period of revolution lasts 27 days and a few hours.